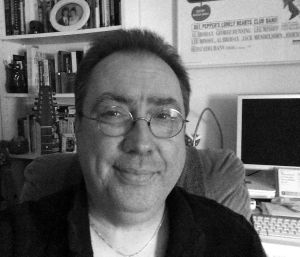 Hi Bill! You’re joining us in Costa Rica in January for our retreat. What has been your writing workshop/retreat experience in the past? How do you find ways to honor your writing in your day to day life?

I’ve attended the Gotham Writers Workshop in NYC and have taken some of their online workshops. Some of us from one of the online classes have stayed in touch and regularly read and critique each other’s work. I also took one of your Fast Flash classes and had a blast.

I mostly succeed at writing every day. It can be anything from a story to working on my novel to journal entries to writing exercises I set for myself. The exercises include things like sketches about ex-girlfriends, “letters never sent,” and writing down everything my dad ever told me about his life. The point is to keep writing. I’ve also slowly evolved into a morning person. I feel like I get more done in the early hours before the rest of the house wakes up.

Respond to this quote by Kurt Vonnegut: “We have to continually be jumping off cliffs and developing our wings on the way down.” ― Kurt Vonnegut

Oh I love Kurt. I think Ray Bradbury said something similar, too. To me it means don’t over-think things, just jump in. I have to remind myself of that every time I start a new story. It also speaks to my going off to Costa Rica. I’ve never done anything like this, which seems as good a reason as any to do it.

What is your favorite story that you yourself have written (“favorite” doesn’t have to mean “best” or more successful or whatever). And why is it your favorite?

“Currents” is a favorite longer story that I’m still honing. It has some attempts at Vonnegut-like commentary and dark humor around climate change, and is also written for my father. He served in the Navy in World War II. He got very sick at one point and his ship had to leave without him. The ship was later sunk in battle with the loss of most of the crew. He always carried around a kind of survivor’s guilt about it. So in the story I try to give him some imagined closure, some absolution.

A favorite flash of mine is called “Portugal.” It’s my attempt at writing in second person. It got honorable mention in a Glimmer Train contest, but I have yet to find a home for it.

Oh wow. What a story about your father! That’s a great idea to write a story that gives that harrowing experience closure. And congratulations on your Glimmer Train nod!

Have you traveled to Costa Rica before? What are you most looking forward to as a writer retreating to this beautiful place?

I’ve never been to Costa Rica, but have heard wonderful things.

I’ve made literary pilgrimages to Mark Twain’s house, Carson McCuller’s house, John Steinbeck’s house, Ralph Waldo Emerson’s house, Walden Pond, Indianapolis (Vonnegut), and Lowell, MA (Kerouac) hoping I would have these writing epiphanies. I once took a cross-country train trip for inspiration, thinking I would get all this writing done. It wound up being more of a four-day Disney ride through America (though it did become writing fodder later). I always come back to the line from Zen and the Art of Motorcycle Maintenance that says the only Zen you find on the tops of mountains is the Zen you bring up there. In other words, the location is not as important as just putting your ass in the chair wherever you are and writing.

I’m sure I will love Costa Rica, and I’m excited to be on such an extended retreat. What’s more important to me is being in the company of other writers, and the chance to work with you and Nancy.

Well, thank you! And I get that regarding: Zen. That makes a lot of sense. I think there’s something to be said for receptivity and for inspiration to line up at the confluence of the right time in the right place. I feel like the Peace Retreat in Costa Rica is such a place. Nancy and I are excited too!

Bill, your wife Lucy is joining you on this trip. How did you get her interested in flash fiction?

I talk about flash all the time, and there are collections all around the house. Oddly enough, I only read excerpts of my work to her — I never show her work in progress. She’s done a lot of corporate writing, and I said flash might be a good way to try out fiction writing. Now she’s coming to Costa Rica. Talk about jumping off cliffs…

I think that’s wonderful! We’re really looking forward to meeting you both! Tell us something we don’t know about you that you are happy to share. : )

In addition to really short stories, I also enjoy really short films and really short songs. I’ve got a collection of 3,000+ songs that are each under two minutes long. I see a lot of similarities between a well-written flash and a well-crafted song that clocks in at 1:32.

Oh I agree. I love short films too. Novellas. Art in miniature. Thanks so much for chatting with me, Bill! Here’s to Costa Rica in January!

Bill Merklee is a writer and graphic designer. His writing has appeared in Columbia, StoryBytes, New Jersey Monthly, and the HIV Here & Now project. He lives in the beautiful Ramapo Mountains of northern New Jersey with his wife and children and two very Zen cats. You can find some things of his at The Amber of the Moment and occasional outbursts on Twitter @bmerklee.

NOTE: A few spaces remain for our Create in Costa Rica retreat in January, 2019. Get more info HERE. Hope you can join us!

Kathy Fish has been writing, teaching, and editing flash fiction for over 20 years. She has published five collections of short fiction, most recently Wild Life: Collected Works from 2003-2018. Her work has been published or is forthcoming in Ploughshares, Copper Nickel, Washington Square Review, and numerous other journals, textbooks, and anthologies. Fish’s widely anthologized “Collective Nouns for Humans in the Wild,” was selected for Best American Nonrequired Reading 2018 and the current edition of The Norton Reader. She is the recipient of a Ragdale Foundation Fellowship and a Copper Nickel Editors’ Prize. Her free monthly newsletter, The Art of Flash Fiction, includes a craft article and writing prompt. Subscribe at artofflashfiction.com . View all posts by Kathy Fish