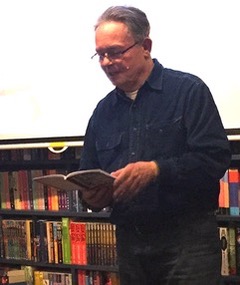 I had the pleasure of meeting John Wheway in person at the Bath Flash Fiction Festival last July, and Kathy Fish and I are just thrilled that he will be joining us in Casperia, Italy, next May!

Nancy Stohlman: The biggest challenge most writers have is finding the time to write. How do you “retreat” in your day-to-day life in order to honor your creativity?

John Wheway: I have few claims on my time, so my challenge is to surrender to the muse rather than carve out hours. Writing happens mostly every day, at almost any time.   Writing in the bath, I hardly notice when the water that almost scalded my skin starts giving me wrinkles. Writing in the small hours on my iPad (favourite writing tool since typewriters disappeared) absorbs me like my childhood devouring of books under the sheets by torchlight.  On walks, the enticement to write can maroon me in the middle of a field. Surrender is the thing, being willing, any time, anywhere, to write.

Nancy: I love that, and I’m amazed that you can write in the bath! Tell us about your relationship with flash fiction. Have you always written short or is this a new endeavor for you?

John: At twelve, I wrote a 400 word prose piece. I’d never read anything of that length, so I guess I invented flash privately for myself. In my early twenties, I drafted an experimental novel which didn’t quite work, but from which I rescued and shaped fragments, which became ‘The Green Table of Infinity’ (Anvil Press, London, 1972). Like much flash, they sit on the fence between story and poem. After this, I neither wrote nor published for many years. When I felt moved to write again, one manual that helped was Roberta Allen’s ‘Five Minute Fictions,’ which prompted over a hundred pieces of Flash. But I didn’t revise, didn’t publish them. I turned to writing poems instead. Meanwhile, Jude Higgins, my wife, plunged into writing and promoting flash.  I peered over her shoulder, but it’s taken time for me to exchange the sentence for the line as the primary unit of composition. Seeing the spectacular things Lydia Davis and our friend Meg Pokrass could do with the form is a constant inspiration. Writing flash feels new again. In the book I’ve begun to write about childhood, poems and flash together will form the texture of the weave.

Nancy: “Writing flash feels new again”–I just love that. You are also part of the Bath Flash Fiction Festival, which I was thrilled to attend this past July. What has been your biggest learning as part of the team responsible for the success of such a dynamic gathering of writers?

John: To be accurate, I wasn’t officially part of the Festival team, but being the director’s husband, I learned I must endure like Atlas.  I enjoyed hosting Meg Pokrass at our house, and also my young friend, David McCormick, a volunteer. And the festival each time has been like a garden coming into bloom.

John: Wonderful eating places tucked into farms and hamlets – homely, hospitable, but each with its unique, exquisite antipasti. A terrace over a steep valley with cafes for watching people (and goats – were there goats?).  During wild days of thunder, lightning and deluge, holed up in our rented cottage, I dug out Saramago’s ‘All the Names’ from a bookshelf.  I read, deafened to the storm. By the last page, the storm-clouds blew away.

Nancy: It sounds so incredible–I can’t wait! So now react to this quote by Italian writer Italo Calvino: ” “Cities, like dreams, are made of desires and fears, even if the thread of their discourse is secret, their rules are absurd, their perspectives deceitful, and everything conceals something else.”

John: As for cities, so for ourselves.  Waking up is hard to do.

Nancy: What piece of your own writing are you most proud of?  Where can we read it (if it’s available)?

John: I tend to think pride, like shame, disrupts the non-judgmental openness writing requires. I might be willing to say, I’m proud to persist at writing –  but edited, this comes out as ‘I persist at writing,’ which is an improvement, don’t you think?  I’m pleased and grateful to have learned recently that my poetry collection ‘A Bluebottle in Late October’ is to be published.  There are links to already published poems and flash on my website ‘johnwheway.com‘ where you can also order copies of my vintage prose chapbook ‘The Green Table of Infinity’.

Nancy: That’s fantastic, congratulations!! Tell us something we don’t know about you?

Nancy: Anything else you want to add?

John: Many yet-to-be-written poems and fictions.

John Wheway’s poems have appeared in New Measure, Stand, Magma, The Warwick Review, Poetry Review, the Yellow Nib, Poetry Quarterly, the Compass Magazine, South Word, Agenda, and the High Window, in three Templar anthologies and in The Echoing Gallery from Redcliffe Press. His flash fiction has appeared in Flash Flood 2017, Flash Flood 2018, and Flash Fiction Festival One (Ad Hoc Fiction – 2017). Anvil Press poetry published his chapbook The Green Table of Infinity, and Faber and Faber published his novella Poborden. He has a Creative Writing MA from Bath Spa University. His poetry collection, A Bluebottle in Late October, is to be published in 2020.