Nancy and I were so thrilled when the lovely, funny, and talented Jayne Martin, who’d participated in our debut retreat last summer in Breckenridge, signed on again for our upcoming Springtime in Italy Retreat in Casperia. We’d interviewed Jayne before and thought this time we’d do something a little different, so we asked her to share some of her writerly wisdom with us here on the blog. Thanks so much, Jayne! 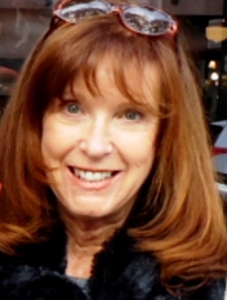 I haven’t been sleeping well. So last night I put an Advil PM on the bathroom counter to take just before going to bed. And I had a great night’s sleep.

Today I noticed that blue pill still sitting right where I’d put it. Never took the goddamn thing. But I believed I did and so my body acted accordingly. We create our reality according to our beliefs, which is great when those beliefs support our best interests. Not so great when they sabotage us.

Lately, I’ve been in a writing funk. Old demons long thought to be banished have arisen. In my case they’re saying, “You’re not good enough, so we’re going to keep you from embarrassing yourself by giving you a shitload of excuses to not write.”

You might know this particular demon. Or maybe you have one of your very own telling you:

“You can’t achieve your goals because your success will take time away from your family.”

“Other people get all the breaks. The odds are stacked against you, so why even try.”

“Look at all that competition! Damn! There’s not enough success, abundance (fill in the blank) to go around.”

Or the ever-popular, “You’re a complete fraud and you’re going to be found out.” Yeah, I got that one, too.

Recently, I called out another writer on what I saw as her bullshit excuses. I should know better. Not because of the obvious — I had no right to judge her — but because the Universe immediately held up a gigantic mirror and said “Judge not lest ye be judged, bitch.” And so I not only owe that other writer an apology, I owe her a big thank you and probably an expensive bottle of wine because now I’ve been forced to look at my own crippling crap.

I haven’t written a thing I’m proud of in months. The last two workshops I took I expected to choke and what do you know? Choke, I did!

The thing about these sabotaging beliefs is they lurk in the deepest crevices of our minds and then run our lives like little tyrants. We don’t even know they are there until what we don’t want keeps showing up in our lives instead of what we do want. “WHY THE FUCK DOES THIS KEEP HAPPENING TO ME?!”

I’m not a religious person, but a good quote is a good quote:  “As you believe, so it shall be unto you” – Jesus Christ (before we made him a Superstar).

Today I was given three opportunities from the Universe to turn around my fears. The first, as mentioned, was the direction to look at my own sabotaging beliefs before I judged others. The second was an invitation from Kathy and Nancy to write this post to which my immediate reaction was, “Oh shit! What am I going to write about?” The third was the loving outreach from a dear writer friend encouraging me to take an upcoming workshop.

Our demons are constantly testing our vigilance. So, I’m going to take that workshop with expectations of only fun and joy, and that is the experience I’m going to create.

Jayne Martin is a 2017 Pushcart nominee, 2016 winner of Vestal Review’s VERA award, and a 2018 Best Small Fictions nominee. Her work has appeared in Literary Orphans, Spelk, Crack the Spine, Midwestern Gothic, MoonPark Review, Blink-Ink, Cabinet of Heed, Connotation Press and Hippocampus among others. She lives in California where she drinks copious amounts of fine wine and rides horses, though not at the same time. Find her on Twitter @Jayne_Martin.

NOTE: Our Springtime in Italy Retreat is now full, but openings remain for High Altitude Inspiration: Four Days in the Clouds in Grand Lake, Colorado (this August) and we’ve just opened registrations for our return to Costa Rica for Writing Wild in 2020! Join us!