Okay, here’s one for the Saturday crowd. I posted this in last year’s Fast Flash Reunion Extravaganza: One thing that is fun to do is to weave facts from other disciplines into your flash fiction (science, art, history, welding, spelunking). I’ve seen this in the marvelous work of Ingrid Jendrzejewski and Tania Hershman to name just a couple.

One of my favorite short stories that does this is “Body Language” by Diane Schoemperlen. I’ve been unable to find it online, but it’s in her collection by the same name and in BASS 1998. It weaves facts about the human body around a story of a couple’s troubled marriage and it’s stunning. (also includes Grey’s Anatomy type illustrations).

It does interesting things to weave a factual voice into an otherwise emotional story for counterbalance. Your facts may serve as metaphors. Or you may use a “borrowed form” from another discipline to tell your story.

Anyway! Your prompt is to do just this in the space of a flash length piece. Consider using the segmented or mosaic form for this. I’ve lifted some science facts below from the internet (so reword them a bit if you use them), but you can also find your own, from science or anything else. Consider including completely made up facts, too!

The heart of a shrimp is located in its head.

It is possible to hypnotize a frog by placing it on its back and gently stroking its stomach.

The Gulf of California is a spreading zone – many millions of years from now, it will be an ocean.

People who wade into the Dead Sea automatically float. Dissolved salts make the water so dense, humans are less dense in contrast and so float.

A human brain can generate electricity and energy when we are awake and therefore can light up a bulb. It operates on the same amount of power of 10 watt light bulb.

A pregnant woman dreams most about three things, frogs, worms and potted plants. Other than this, due to hormones, women also dream about water or even have sexual and violent dreams.

The brain is capable of surviving for 5 to 6 minutes only if it doesn’t get oxygen after which it dies.

The average heart is the size of a fist in an adult.

Christmas day is the most common day of the year for heart attacks to happen. 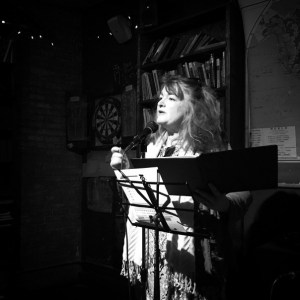 One of my favorite sentence and language level writers is our own Anne E. Weisgerber, whom we’re delighted will be joining us (again) in Colorado this August for our High Altitude Inspiration Retreat (Note: There is ONE remaining room available for this & still time to register!). Below is an excerpt from Anne’s essay, “Flash Fiction as Language Art” which ran in Smokelong Quarterly:

I only attest that the act of forming sentences and scenes, the punctuation, the pushed and brushed pigment of vowels and verbs and slow-motion ninja gerund phrases has become a vocation. Flash is an artist’s medium; writing it places one where people care about art.”

“I realized I could craft flash miniatures that added up to something bigger if I intended them to, like dabs in a Seurat painting. In this way, my reader at novel distance will see the rose window, hear the orchestra, experience the video wall of calibrated gifs but within scenes, each pane, each cellist, each meme stands alone. A reader might experience my novel as a flash choir, or pointillism, or whatever it winds up being. Flash forces writers to have the nerve to say: THESE WORDS ARE BEAUTIFUL. So I find myself now writing a huge novel in meditative, colorful spoonfuls. I must remember to look at images my words create, both at the linseed tip of my nose and at twenty skeptical paces. Up close, I worry: How can I honor this life with my writing? At practical, admission-paying distances, I fret: What’s in it for my reader?

You may read the whole terrific essay here at Smokelong Quarterly.

A.E. Weisgerber is from Orange, NJ and has recent/forthcoming work in 3:AM, Yemassee, DIAGRAM, Matchbook Lit, Gravel Mag, and The Alaska Star. She is a 2018 Chesapeake Writer, 2017 Frost Place Scholar, 2014 Reynolds Fellow, and Assistant Series Editor for the Wigleaf Top 50. She is writing her first novel. Follow @aeweisgerber or visit anneweisgerber.com

NOTE: There is ONE room remaining (for one or two) and still time to join us for High Altitude Inspiration in Grand Lake in August. Join us!